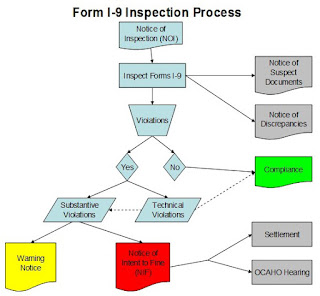 The U.S. Department of Homeland Security (DHS), the U.S. Department of Justice (DOJ), and the U.S. Department of Labor (DOL) recently each released final rules to increase immigration-related penalties effective August 1, 2106. The Federal Civil Penalties Inflation Adjustment Act Improvements Act of 2015 requires the agencies to make annual adjustments for inflation based on the Consumer Price Index for All Urban Consumers. These increased fines will be retroactive to November 2, 2015.

I-9 “paperwork violations” refers to technically improperly completed I-9s, while the “unlawful hires” refers to knowingly hiring, recruiting, referring, or retaining unauthorized alien workers, or just not being able to locate a Form I-9 for that person. Increased Penalties:

·         Penalty amounts for third or subsequent offenses will be up to $21,563 for each unauthorized worker;

·         DOJ’s document abuse penalties increase to between $178 and $1,782. “Document abuse” is a form of discrimination in which the employer asks the employee to provide more documents or different documents than the law requires, or where the employer refuses to accept facially genuine documents;

·         DOJ’s  “Unfair immigration-related employment practices” increase to a maximum amount of $17,816 for each individual discriminated against. This would include refusing to employ someone because the person is not a U.S. citizen or because the person appears to be foreign, even though the person might have valid authorization to be employed in the United States; and

2.  Establish and maintain appropriate policies, document retention practices and safeguards against use of the verification process for unlawful discrimination, and to ensure that U.S. citizens and authorized workers do not face discrimination with respect to hiring, firing or recruitment or referral for a fee because of citizenship status or national origin;

3. Have all involved in the hiring process training on how to properly complete the Form I-9; and

4. Appreciate that an ounce of prevention now is priceless!

Tommy Eden is a partner working out of the Constangy, Brooks, Smith & Prophete, LLP offices in Opelika, AL and West Point, GA and a member of the ABA Section of Labor and Employment Law and serves on the Board of Directors for the East Alabama SHRM Chapter. He can be contacted at teden@constangy.com or 334-246-2901. Blog at www.alabamaatwork.com