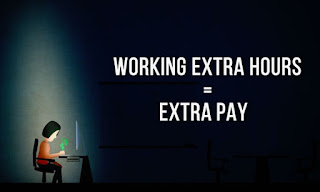 In 2014, President Obama directed the Secretary of Labor to update the overtime regulations to reflect the original intent of the Fair Labor Standards Act, and to simplify and modernize the rules so they’re easier for workers and businesses to understand and apply. The department has issued a final rule that will put more money in the pockets of middle class workers – or give them more free time.

The final rule will:
Raise the salary threshold indicating eligibility from $455/week to $913 ($47,476 per year), ensuring protections to 4.2 million workers.

Automatically update the salary threshold every three years, based on wage growth over time, increasing predictability.

The final rule will become effective on December 1, 2016, giving employers more than six months to prepare. The final rule does not make any changes to the duties test for executive, administrative and professional employees.

Final Rule: Overtime
Defining and Delimiting the Exemptions for Executive, Administrative, Professional, Outside Sales and Computer Employees under the Fair Labor Standards Act

On May 18, 2016, President Obama and Secretary Perez announced the publication of the Department of Labor’s final rule updating the overtime regulations, which will automatically extend overtime pay protections to over 4 million workers within the first year of implementation. This long-awaited update will result in a meaningful boost to many workers’ wallets, and will go a long way toward realizing President Obama’s commitment to ensuring every worker is compensated fairly for their hard work.

In 2014, President Obama signed a Presidential Memorandum directing the Department to update the regulations defining which white collar workers are protected by the FLSA's minimum wage and overtime standards. Consistent with the President's goal of ensuring workers are paid a fair day's pay for a hard day's work, the memorandum instructed the Department to look for ways to modernize and simplify the regulations while ensuring that the FLSA's intended overtime protections are fully implemented.

Key Provisions of the Final Rule
The Final Rule focuses primarily on updating the salary and compensation levels needed for Executive, Administrative and Professional workers to be exempt. Specifically, the Final Rule:
Sets the standard salary level at the 40th percentile of earnings of full-time salaried workers in the lowest-wage Census Region, currently the South ($913 per week; $47,476 annually for a full-year worker);

Sets the total annual compensation requirement for highly compensated employees (HCE) subject to a minimal duties test to the annual equivalent of the 90th percentile of full-time salaried workers nationally ($134,004); and

Establishes a mechanism for automatically updating the salary and compensation levels every three years to maintain the levels at the above percentiles and to ensure that they continue to provide useful and effective tests for exemption.

Additionally, the Final Rule amends the salary basis test to allow employers to use nondiscretionary bonuses and incentive payments (including commissions) to satisfy up to 10 percent of the new standard salary level.

The effective date of the final rule is December 1, 2016. The initial increases to the standard salary level (from $455 to $913 per week) and HCE total annual compensation requirement (from $100,000 to $134,004 per year) will be effective on that date. Future automatic updates to those thresholds will occur every three years, beginning on January 1, 2020.