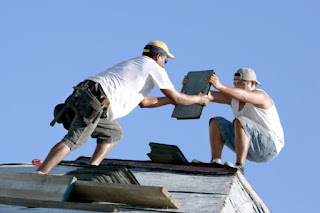 Marcus Borden, a Russellville steel and roofing contractor, on March 18, 2013, was supervising a roofing crew of five men in Cordova, Alabama when a severe thunderstorm occurred. Three of the five men were seriously injured in the storm. One worker was thrown against the edge of a new metal roof and suffered a left arm amputation, a second was thrown across the roof and suffered an injured shoulder, and the third worker became wrapped in a sheet of metal, managed to escape, but was carried by the momentum over the roof's edge and fell 30 feet to the ground. The worker broke his wrists, ribs, tailbone and pelvis. None of the workers had been provided with OSHA mandated fall protection equipment. None of them were tied-off to the roof at the time of the accident or had a means to exit the roof quickly.

An OSHA inspector cited Borden for six safety violations following the incident, including a willful citation for failing to provide workers with fall protection while working within 6 feet of an open edge that was 30 feet above the ground. OSHA also cited Borden for four serious violations for exposing workers to severe weather conditions and not securing metal decking during inclement weather conditions. One other violation was cited for failing to notify OSHA about the workers being admitted to the hospital due to a work-related incident.

When questioned by the Inspector, Borden stated that he had been present on the job site on the day of the accident and that he had obtained personal fall arrest equipment to protect workers from falls on March 13, 2013, when actually Borden had retained the equipment on March 18, 2013, after the incident occurred. Borden also claimed that employees had been tied off when he knew, in fact, they were not.

Borden contested OSHA's citations but later settled the case, agreeing to all violations as cited and a penalty of $55,000. The settlement was approved by the Occupational Safety and Health Review Commission.

On April 6, 2015, the U.S. Department of Justice charged Marcus Borden with making false statements and lying to an OSHA Investigator. Borden pleaded guilty to one count of making false statements on May 13, 2015. On August 6 he was sentenced by a Birmingham Federal Judge to three years of supervised probation and must complete 30 hours of community service.

Common Sense Counsel: Keep in mind these 7 Tips When OSHA Comes Knocking: 1) Don’t Lie; 2) Have at least one designated person trained on how to interact with the Inspector; 3) Ask why OSHA is there; 4) Shadow the Inspector and take similar pictures; 5) Prepare your workers for interviews; 6) Know your rights; and 7) Take great notes during the closing conference.

Tommy Eden is a partner working out of the Constangy, Smith & Prophete, LLP offices in Opelika, AL and West Point, GA and a member of the ABA Section of Labor and Employment Law and serves on the Board of Directors for the East Alabama SHRM Chapter. He can be contacted at teden@constangy.com or 334-246-2901. Blog at www.alabamaatwork.com and follow on twitter tommyeden3