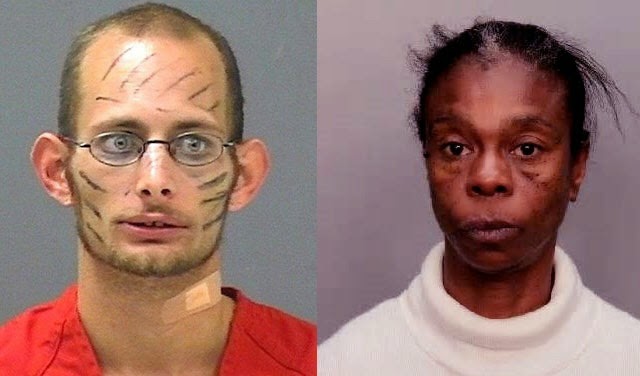 Tito and Amanda Watts were arrested on March 31 in Jacksonville, Florida for selling golden tickets to heaven to hundreds of people. The couple, who sold the tickets on the street for $99.99 per ticket, told buyers the tickets were made from solid gold and each ticket reserved the buyer a spot in heaven — simply present the ticket at the pearly gates and you're in.

"People can sell tickets to heaven," a Jacksonville police spokesman said. "But the Watts misrepresented their product. The tickets were just wood spray painted gold with 'Ticket to Heaven — Admit One' written in marker. You can't sell something as gold when it's not. That's where the Watts crossed the line into doing something illegal."

Tito Watts said in his police statement: I don’t care what the police say. The tickets are solid gold… it ain’t cut up two by fours I spray painted gold. And it was Jesus who give them to me behind the KFC and said to sell them so I could get me some money to go to outer space. I met an alien named Stevie who said if I got the cash together he’d take me and my wife on his flying saucer to his planet that’s made entirely of crack cocaine. You can smoke all the crack cocaine there you want… totally free. So, try to send an innocent man to jail and see what happens. You should arrest Jesus because he’s the one that gave me the golden tickets and said to sell them. I’m willing to wear a wire and set Jesus up…

Amanda Watts said in her police statement: We just wanted to leave earth and go to space and smoke rock cocaine. I didn’t do nothing. Tito sold the golden tickets to heaven. I just watched. Police said they confiscated over $10,000 in cash, five crack pipes and a baby alligator.

Many readers shared the above story via social media after 31 March when it appeared on the entertainment web site Stuppid, apparently believing that Tito and Amanda Watts were actually arrested for selling golden tickets to heaven. This story, however, was a work of fiction according to snopes.com. The bizarre photograph of "Tito Watts" that accompanied the article was an unrelated 2011 image taken from a collection of bizarre police mugshots. It even had me fooled because I have listened to actual client situations where the impairing effects of illegal drugs made this story sound totally believable. I have added “selling ticket to heaven signs” to my suggested reasonable suspicion checklist for supervisory training.

Now that you have stopped laughing it is time to sober up because on April 16, 2015, Georgia Governor Nathan Deal signed the Act to create the Georgia Commission on Medical Cannabis with eight-listed medical condition for which THC oil can be used as a treatment. Georgia becomes the 24th State to adopt a medical marijuana law.

Common Sense Counsel: Before Tito and Amanda Watts turn in their employment applications to your business:
1. Understand the laws on Medical Marijuana that are specific to states where employees report for duty;
2. Adopt a legally vetted pre-duty prescription medication and impairing effects substances safety policy that makes it all about safety;
3. Update employee job descriptions to cover critical safety sensitive issues;
4. Adopt an ADA complaint handbook policy on reasonable accommodations in those more difficult states that grant some level of employee status protections;
5. Let employees know your stance on Medical and Recreational Marijuana use;
6. Update your drug-free workplace policy and forms to stay in compliance and reduce the risk of claims and lawsuits; and
7. Stay tuned as these laws continue to rock your employment world.

Tommy Eden is a partner working out of the Constangy, Brooks & Smith, LLP offices in Opelika, AL and West Point, GA and a member of the ABA Section of Labor and Employment Law and serves on the Board of Directors for the East Alabama SHRM Chapter. He can be contacted at teden@constangy.com or 334-246-2901. Blog at www.alabamaatwork.com with picture of Tito and Georgia Medical Cannabis Law and follow on twitter tommyeden3