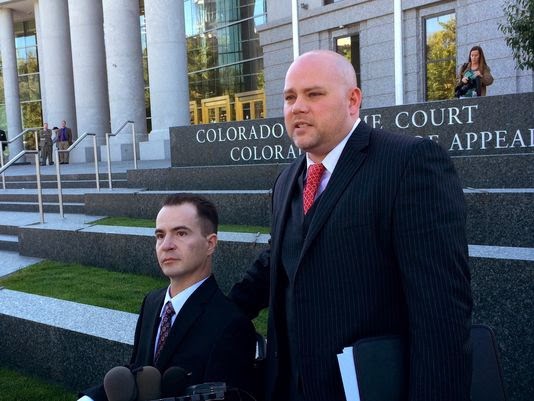 Brandon Coats was partially paralyzed in a car crash as a teenager, using a wheelchair, and has been a medical marijuana patient since 2010 when he discovered that using pot helped calm violent seizures and muscle spasms. Coats was a telephone call-center operator with Dish Network for three years before he failed a cheek-swab random drug test in 2010 and was fired. Dish Network has a zero-tolerance policy against using illegal drugs.

On Tuesday, the Colorado Supreme Court heard oral arguments in Brandon Coats’ case that may have major impact on marijuana and the workplace. Colorado voters first approved a constitutional amendment authorizing the use of medical marijuana in 2000. Marijuana for recreational use was approved by voters in 2012 and started being sold in retail shops in Colorado on April 1, 2014.

Twenty-three states and the District of Columbia now have medical marijuana laws. Washington and Colorado laws specifically state that employers do not  have to accommodate employees’ marijuana use. But other states such as Arizona, Nevada, New York, Minnesota, and Delaware grant various levels of protections to medical marijuana card holders from discrimination.

Additionally, the Supreme Courts for the states of California, Washington, and Montana have all ruled that an employer has no duty to accommodate the use of an “illegal drug” such as marijuana. The fact that marijuana remains a schedule one “illegal drug” under federal law has been critical in each ruling for the employer.

Coats brought his lawsuit against Dish under Colorado’s lawful off-duty activities law, which specifically says employers cannot fire people for doing something legal on their own time. Originally the law was enacted to protect cigarette smokers and multiple states have similar laws. Both the trial judge and Colorado Court of Appeals have already ruled against Coats “legal use” argument holding that as long as marijuana is illegal under federal law the state law does not apply.

During the Tuesday Colorado Supreme Court hearing the justices did little to telegraph how they may vote. Only six of seven justices will decide the case as one recused himself because his father sits on the Colorado Court of Approval. Each side was asked to draft a proposal opinion for the justices to consider. A ruling may be months away. A tie means that the Court of Appeals ruling for Dish stands.

Common Sense Counsel: So what should an employer who has employees assigned to work in a medical marijuana state do? Consider these 5 Steps an employer can take to successfully walk the workplace marijuana tightrope:

Tommy Eden is a partner working out of the Constangy, Brooks & Smith, LLP offices in Opelika, AL and West Point, GA and a member of the ABA Section of Labor and Employment Law and serves on the Board of Directors for the East Alabama SHRM Chapter. He can be contacted at teden@constangy.com or 334-246-2901. Blog at www.alabamaatwork.com and follow on twitter @tommyeden3