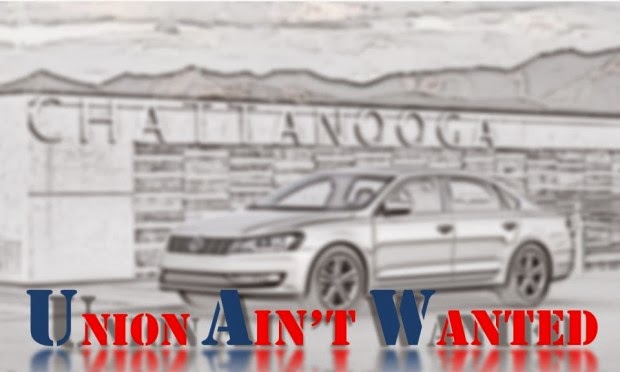 On Valentines Day, workers at Volkswagen’s Chattanooga, Tenn. assembly plant will finalize voting on whether to form a union. This was after the National Labor Relations Board (NLRB) scheduled a vote at the request of Volkswagen Group of America to conduct a “rocket election” with less than two weeks notice to employees.

There is great concern about the existence of backroom deals cut between Volkswagen and UAW officials which gave union organizers preferential access to the workers leading up to the election. There have been calls to release any agreements VW has signed regarding what would happen if the UAW union takes monopoly bargaining power over the workplace, including agreements to impose a so-called work council on the employees. Last fall several VW workers filed charges alleging improprieties in the UAW union card check process, including getting workers to sign union authorization cards by coercion and misrepresentation. Some of those workers also filed charges with the NLRB against VW alleging that statements by German VW officials were illegally intimidating their fellow workers to accept UAW monopoly bargaining power over their workplace.

The UAW says it is seeking to create a European-style labor agreement in Tennessee that would follow arrangements VW has at other plants around the world. The "work council" style of labor-management puts workers on a board with management that sets work rules and can arrange schedules and other conditions in the plant. In other regions of the world a formal independent union isn't required to have a work council, but in the U.S., labor law requires an outside union to establish such an entity.

Common Sense Counsel: By this shot gun wedding VW is trying to force its Chattanooga employees into a Valentines Day love affair with the UAW. Don’t be deceived! The UAW is a wolf in sheep clothing (work councils) seeking to devour the paychecks of its members.

7 Steps your Company should take ASAP to stay Union free:
1) Let your employees know how you feel about a union in your employee handbook;
2) Don't be afraid to send a letter home to employees reiterating your position;
3) Check your no solicitation, no distribution, social networking, internet usage policies for legal compliance and property signage;
4) Train your supervisor on appropriate and legal union avoidance steps (TIPS) within the law and conduct a mock union election with top management because the NLRB just posted at nlrb.gov its new ambush election proposed rules;
5) Train your managers and supervisors to be good coaches by showing appreciation for the hard work of employees, involving them in decisions and helping to promote their career path;
6) Survey your employees on what you can do better with regards to safety, working conditions, communication etc – then do it.; and
7) Take affirmative steps to reduce the risk of harassment, favoritism, bullying, retaliation and anything else that would hinder a respectful working environment.

Tommy Eden is a partner working out of the Constangy, Brooks & Smith, LLP offices in Opelika, AL and West Point, GA and a member of the ABA Section of Labor and Employment Law and serves on the Board of Directors for the East Alabama SHRM Chapter. He can be contacted at teden@constangy.com or 334-246-2901. Blog at www.alabamaatwork.com E-mail: teden@constangy.com
Posted by Tommy Eden at 2:57 PM