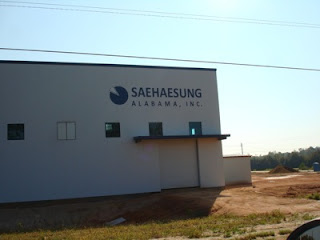 Saehaesung Alabama Inc. in Andalusia has been cited for eight safety violations by the U.S. Department of Labor's Occupational Safety and Health Administration. The citations, carrying fines of $179,300, were issued after OSHA conducted a follow-up inspection to evaluate the abatement of violations found during 2009.

The company, whose parent company is in Korean, manufactures automotive chassis and body parts for Hyundai and Kia, has 15 business days from receipt of the citations and proposed penalties to comply, request a conference with OSHA's area director or contest the findings before the independent Occupational Safety and Health Review Commission. The site was inspected by OSHA's Mobile Area Office.

Saehaesung Alabama has been cited for two willful violations with fines of $140,000 for failing to develop, document and utilize lockout/tagout procedures for energy sources, and to provide workers with the knowledge and skills necessary for safe usage and removal of energy control devices. A willful violation exists when an employer has demonstrated either an intentional disregard for the requirements of the law or plain indifference to employee safety and health.

OSHA also has issued the company one repeat citation with a $16,500 penalty for not providing training and information to employees on hazardous chemicals. A repeat violation exists when an employer previously has been cited for the same or a similar violation of a standard, regulation, rule or order at any other facility in federal enforcement states within the last five years. This location was cited for the same hazardous communication violation in 2009.

Additionally, four serious citations with $22,800 in penalties were issued for allowing employees to work where exit routes were partially blocked, permitting alloy slings without permanent affixed identification for size, grade, rated capacity and reach, using worn and damaged alloy steel chain slings, and failing to use safety blocks while adjusting dies in the mechanical power press. A serious violation occurs when there is substantial probability that death or serious physical harm could result from a hazard about which the employer knew or should have known.

The company received one other-than-serious citation with no proposed penalty for not maintaining inspection records for the mechanical power press. An other-than-serious violation is one that has a direct relationship to job safety and health, but probably would not cause death or serious physical harm.

OSHA found that this case meets the criteria for OSHA's Severe Violators Enforcement Program. Initiated in the spring of 2010, the program is intended to focus on employers that endanger workers by committing willful, repeat or failure-to-abate violations in one or more of the following circumstances: a fatality or catastrophe; industry operations or processes that expose workers to severe occupational hazards; exposure to hazards related to the potential releases of highly hazardous chemicals; and all per-instance citation (egregious) enforcement actions. Enforcement actions for severe violator cases include mandatory follow-up inspections, increased company/corporate awareness of OSHA enforcement, corporate-wide agreements, where appropriate, enhanced settlement provisions, and federal court enforcement under Section 11(b) of the Occupational Safety and Health Act. For more information about the program, visit http://www.osha.gov/pls/oshaweb/owadisp.show_document?p_table=DIRECTIVES&p_id=4503.

Common Sense Counsel: It is advised that you have a comprehensive safety audit conducted ASAP. The next time OSHA “comes to help you” the cost of being in the wrong just went up.

Tommy Eden is a resident of Auburn, an attorney with the local office of Capell & Howard, P.C. and a member of the ABA Section of Labor and Employment Law and serves on the Board of Directors for the East Alabama SHRM Chapter. He can be contacted at tme@chlaw.com or 334-501-1540.
Posted by Tommy Eden at 8:37 AM